An Abjurer and minor scion of the Medvyed family. Hopes one day to be known as Feybane.

Immanuel was born in western Brevoy, the only son of a minor son of the Medvyed family with a small holding in the Gronzi forest. He was raised by his mother after his father – a renowned scholar of fey habits and haunts – disappeared on one of his many explorations of the forest depths.

Seemingly since birth, Immanuel has attracted the constant attention of fey creatures. Following his father’s disappearance, however, these attentions, once benign, grew increasingly cruel and, in order to protect her son, Immanuel’s mother apprenticed him to a great abjurer in distant Taldor at the age of ten.

Since completing his apprenticeship, Immanuel has returned to the land of his birth and, thence, to the Stolen Lands as part of the Order of the Broken Arrow where he has assisted in the founding of the realm of Saraithis.

As Lord High Protector, Immanuel serves as the new kingdom’s Magister and has recently established an arcane Academy on the island of Candlemere to the south of the capital Hartsfall to assist in strengthening the kingdom’s magical defences.

Those who know him speak of a kind-natured man, willing to put himself in harm’s way to shield others. If he has a blind-spot, however, it is in his dealings with the fey. After a life-time of torment, Immanuel sees little redeeming in their behaviour and barely tolerates their presence at the best of times – a fact that has led to some friction with his cousin Queen Uryllia, a fey-blooded sorceress. 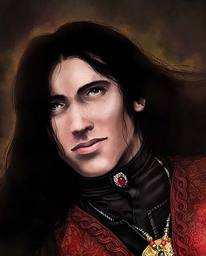