Lanliss is a tall, dark haired elf with a sardonic smile and a malicious sense of humour. His enchanted blades seem to move with a life of their own as he gracefully flows through the Aldori sword kata.

Born in the Elven Kingdom of Kyonin, Lanliss spent the first hundred years of his life as a spoilt princling. The noble house of Gyre has a reputation for producing powerful mages with questionable morals. Before the abandonment, one of these mages subjugated a black dragon and performed dark breeding experiments. The most famous result are the herd of half-dragon horses that still carry the sorcerous troops of House Gyre into battle. Lanliss grew up surrounded by the dark majesty and magic of the House’s tree palaces. Much to his parents disgust, Lanliss never took to magic and spent most of his time wallowing in the decadence that surrounded him. His younger sister, already a powerful mage, was made heir which angered Lanliss greatly. He left Kyonin, swearing to prove his worth to House Gyre.

Lanliss wandered Golarion until he came to Brevoy. There he learned of the Aldori Swordlords, blademasters without peer. He vowed to learn their secrets and bring them back to house Gyre, adding steel to their already formidable sorcery. Unfortunately the swordlords guard their secrets closely and Lanliss’ inbred arrogance won him few friends. He spent his dwindling wealth on lessons from lesser sword masters and disillusioned, fell back into old habits. He spent the next twenty odd years drinking, seducing noblewomen and gambling away his remaining fortune.

Even with his money gone, Lanliss would not leave the area as a vow is sacred to the elves. Finally sober and with his money and pride much reduced, Lanliss signed up with a group of adventurers to map the Southern lands for the Swordlords, hoping to finally win their favour. The leader of this band was a young halfelven sorceress called Uryllia, a noblewoman from House Medvyed. After a few questions Lanliss learned that she was sired by an unknown elf of questionable reputation some twenty years ago. Lanliss remembered her mother well and saw her ethereal beauty, along with his own features reflected in Uryllia.

Lanliss has finally found his focus, or as the elves call it, his light. He is determined to aid his new found daughter to gain a kingdom and to fulfill his vows. With this focus his blade skills have increased dramatically, he has gained favour from the swordlords and has begun tutelage under the enticing swordlady Jhamdi Aldori. 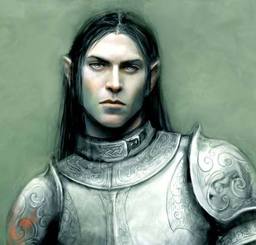